During national lockdowns, they lost around a quarter of face-to-face teaching time

The Harris Academy East Dulwich Sixth Form paid tribute to the “outstanding achievements of its A-level students in the face of adversity.”

During national lockdowns, they lost about a quarter of face-to-face teaching time.

The top performing students recognized by the school for particular praise include Adrian Porteros Rubio, who completed an engineering apprenticeship at Amazon after earning A, A and distinction * in math, physics and computer science.

He said: “I am happy to have completed my A levels with excellent results, the next step being an apprentice mechatronics engineer at Amazon.

“I would like to thank all of my teachers for their support over the past seven years at Harris Boys Academy East Dulwich and my family for being there at all times. Thank you.”

Fernando Gonzalez Ojeda will join KPMG to begin his apprenticeship after obtaining A, A, B in Physics, History and Economics.

While Lexi Lloyd-Smith will head to the University of Alabama after receiving a football scholarship.

Lexi obtained a double Distinction * in her sports diploma and a distinction in her company CTEC.

Students attending some of the UK’s top universities include Yussuf Seidi, who will be studying physics with astrophysics and cosmology at the University of King’s College London after earning A, B, C in physics, history and mathematics. 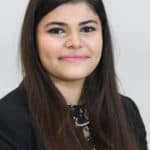 Student Yesim Tasdemi made history by being the first from the Harris Academy Girls in East Dulwich to secure a place to study medicine. She obtained three A’s in math, biology and chemistry.

Principal Peter Groves, Harris Boys’ Academy East Dulwich, said: “We would like to warmly congratulate all of our students on their fantastic results today.

“We are extremely proud of all of them and have no doubts that they will all continue to accomplish great things.

“Despite all the challenges that were thrown at them, they shone brightly.

“We wish them well as they embark on the next exciting chapter of their lives.”